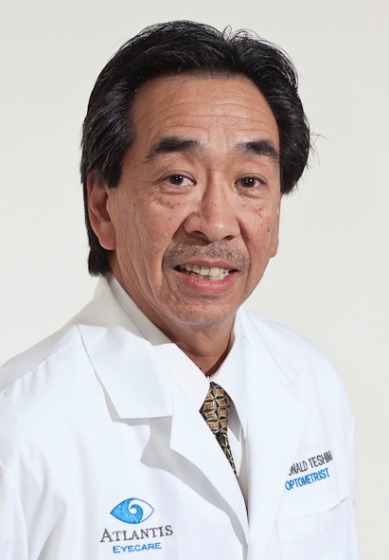 Dr. Donald R. Teshima is a top optometrist and eye doctor working out of the Atlantis Eyecare office in Huntington Beach.

In 1987, he was recruited by A.J. Marchin, OD for the FHP Health Maintenance Organization. FHP eventually turned into the Talbert Medical Group, from which Atlantis Eyecare was born. Dr. Teshima has remained an integral part of Atlantis Eyecare since its establishment.

Dr. Teshima has been married for 20 years and has 3 children. He enjoys spending time with the family and watching sports.

We have followed Dr. Teshima from Office to Office and pray he doesn't move anymore. We believe he is very competent and knowledgeable about his profession. He also exhibits great customer care or "bedside manner". We are traveling "out of our way" to make appointments directly with him. Hopefully, he won't be transferred to another office too far away.

We just met Valerie Mason, a new Optician in Huntington Beach. What a breath of fresh air! She knew exactly what frames would be best for us and her measurements were so exact we didn't need any adjustments when we picked-up our new glasses. We also received a prompt phone call when they arrived and told us when we could pick them up. We have not received that type of service at your other locations.

Please convey our sincere thanks for jobs well done!

I have problems having anything get near my eyes and Dr. Teshima was very patient with me. He also listened to me and was very understanding of my issues.

I received a call from a patient that wanted to share her and her husband’s overall experience at our Huntington Beach office. She mentioned how caring and pleasant Cesar was and she was very impressed that he is only 20 years old and said he really picked the right type of profession because of how he treats people. In addition, she mentioned Dr. Teshima was great and she really felt he took his time to make sure her and her husband understood what needed to be done. She mentioned they don’t normally like to go to the eye doctor because they are usually nervous but Dr. Teshima really made them feel good and they look forward to future appointments with him. Lastly, she mentioned that Valerie was very good as well, she really felt good with the level of knowledge she had and she was also very happy with the frames she found. Overall, she said everyone made a great team.

Very impressed with the attitude and patience of both Dr Teshima and Dr Desai. Professional support staff as well.

Please take a moment to rate your experience
with our team.